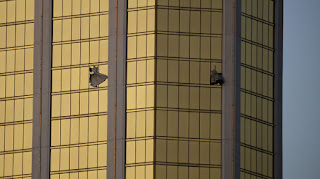 I'm busy multitasking several things at once on the homefront but I just wanted to mention some conflicting reports that are coming in about the Las Vegas shooting. The first thing I want to emphasize is that what happened was horrific. There is no way to dispute or minimize that. Notwithstanding that fact we are hearing conflicting reports of a second shooter.

I'm just going to throw it out there for people to look into. I understand that Infowars posted a video of a second shooter and "debunkers" claimed it wasn't a second shooter it was a strobe light. I find it hard to believe that it was a strobe light. That's kind of like saying the Thermite residue Professor Steven Jones found in the 9/11 ruble was due to chalk. Not likely.

I'm looking for confirmation of a police radio call that confirms a second shooter. There is also conflicting evidence as to whether or not he was alone in his room or had visitors from Blackwater with him that night. A room service receipt shows he had two guests. I'll look into it later.