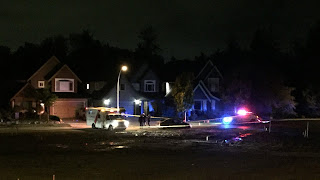 Global is reporting that a man and a woman were shot at King George Boulevard and Crescent Road in south Surrey 2:10 a.m. this morning. The man has died and the woman remains in serious condition.

"The victims were found at two locations – the man was found at 36A Avenue and Elgin Road and the woman was found in a vehicle at the King George Boulevard and Crescent Road location. Police say they believe the man and the woman were shot in the same location, in the area of 36A Avenue and Elgin Road ,and then they dispersed. The female victim had driven herself a short distance away from the scene and then called 911."

"About an hour after the shooting, a car was found on fire in the 8500-block of 204 Street in Langley. The vehicle had no licence plates and the owner has not been found."