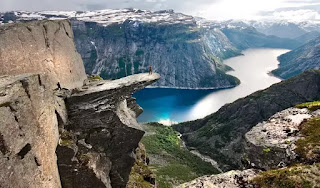 When I used to live in Ireland I had a friend who was from Norway. He had served in the military and said he was born with skis on his feet. Coming from Canada, I respected that.

We don't live in igloos in Canada and run around on dog sleds. Vancouver is quite mild like Seattle. We get lots of rain and if we are lucky, we get a lot of snow in the mountains not the city. We like to hike, bike, run, kayak, sail, ski and snowshoe. We love the outdoors. Most of us.

Norway strikes me as a place I'd like to visit but I can tell you right now if I went all the way to Norway, I wouldn't be spending all my time in the bar. I might stop at a pub for a pint but I would want to see Norway not the inside of a bar. Norway has a lot of amazing hikes.

Norway also has some amazing skiing and snowshoeing. Now that's what I'm talking about. They even have a snow hotel complete with ice beds. That might be a bit extreme for some but the bottom line is that there is lots to see and do there.

Which brings us to the recent news of the Rock Machine in Norway disbanding and joining up with the No Surrender MC. It's none of my business and I'm certainly not going to disrespect any of them especially since Michael has friends in both groups. Personally, I will never wear a patch and I will never call myself a 1%er. Not to say that I would never ride with or be friends with anyone who does. I'm just saying I am different and I prefer to stay that way.

When I reported on the Mongols opening up a chapter in Vancouver, one person commented and said we'll see how long they last. That is fair comment. A lot of these fly by night crews change their colors faster than they change their underwear. The Mongols are a bit different. They are much more established and are huge in California. However, BC is not Cali and whether or not locals here have the fortitude to live up to the Mongols reputation in California has yet to be seen.

When I first started my blog I had two founding premises. The first was that the Hells Angels were a criminal organization. The second was like unto it, that the CIA was also a criminal organization. In the process of time I have amended my first premise. Although I am concerned with organized crime, I am even more concerned with civl liberty. Confronting organized crime while protecting civl liberty goes hand in hand. The US government's attempt to seize the Mongols patch is a real concern for anyone who loves liberty.

I don't like drug dealers. Especially those that exploit the homeless and brutalize sex trade workers. The Hells Angels said, we don't sell drugs. My response is then we dont have a problem. Yet some members do. Now we have a problem.

What consenting adults do behind closed doors is none of my business. The keywords there are consenting adults. Drugs in clubs or for those who want it and can afford it does not concern me. Human trafficking is not consensual. It is brutal exploitation. I have no problem with living the dream. I have a problem with pimping the dream. Using the movement to bully and exploit others. That is not what it's all about. The movie Easy Rider was about living the dream. You dont need a patch on your back to do that. You certainly don't need to sell drugs to do that either.

I don't want to see a war between the Mongols and the Hells Angels any more than I want to see a war between the Rock Machine and the No Surrender MC or the Bandidos. No one does. It's not that I'm afraid of war, it just that I believe war needs to have a purpose. If it's not the right cause, it's just not worth it. In LA the Crips and the Bloods used to fight each other bitterly simply because they each wore a different colour and the rest of us thought it was kind of dumb.

Years ago, in Florida two rival gangs were fighting over the right to sell drugs during a specific time slot on a specific street corner. A little girl was cut in half from automatic weapon cross fire. Curtis Sliwa led a protest march carrying a mock coffin. He wrote the little girl's name on the street corner and the words never again. The Guardian Angels then led the community in a crackdown on crack campaign which was very successful. People had enough of the violence and wanted things to change. Fighting a war over what colour you wear is dumb. Fighting a war over a monopoly on the drug trade is evil. There is no honour in it. The public will not tolerate it.