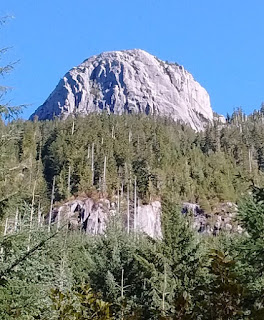 After what seemed like a month of rain, we are finally in the middle of a week of sunshine so I seized the day and took the bike out to Squamish. As I was gassing up for the journey there were several bikes at the gas station. One guy was wearing an Ironworkers MC patch. Seemed like a nice enough guy. They must be like the Teamsters Horsemen. I have no problem with people living the dream. I have a problem with people pimping the dream. Using the movement to exploit others. That's not what it's all about. 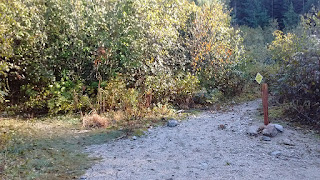 So I finally found the right trail up Mount Habrich. You start off going up the Sky Pilot trail then take a left at the junction with the end of marked access sign. From there it is as they said, quite steep. Which is fair enough because you get the elevation gain behind you. Only what goes up must come down and climbing down a steep slope is a bit more challenging than climbing up it.

I made it three quarters of the way up and decided to turn back. I thought not summiting isn't failure, getting lost is. The trail is not very well marked and I didn't want to get lost missing a switchback climbing down the steep slope. If there were more people on the trail it wouldn't have been so bad but nobody else was on the trail at all. I guess the dusting of snow at higher altitudes has everyone getting ready for the winter season. It's going to be an awesome winter.

Riding back in the sunshine along the Sea to Sky highway was another Zen moment. The sun and wind in the face, the mountains and trees everywhere along the inlet was very peaceful. I stopped at Porteau cove to take this shot. It's a nice ride so it is. 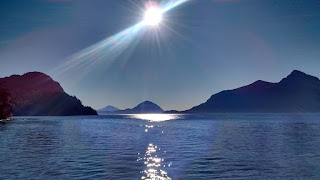