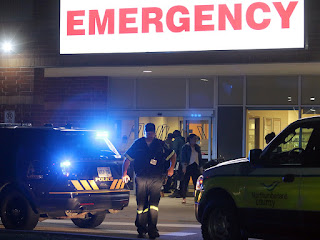 The Canadian Press is reporting that "A place intended for healing became a scene of violence and trauma when two rounds of gunfire erupted in a southern Ontario hospital, killing an elderly married couple and leaving other patients fearing for their lives."

SIU spokesman Jason Gennaro said a 70-year-old man and 76-year-old woman, who were married to each other and lived within an hour of Cobourg, were both admitted to txhe hospital's emergency room late Friday night with unknown ailments. Around 11 p.m., Gennaro said police were called to the scene after receiving reports that shots had been fired in the triage room where both the man and the woman were lying side by side on gurneys.

One patient spoke to other patients who she said told her the man had shot the woman in the head. The Toronto Star is reporting that the police shot the man after he shot his wife in the head at the Northumberland Hills Hospital.

Posted by Dennis Watson at 7:17 AM