Edmonton LRT is a bad model 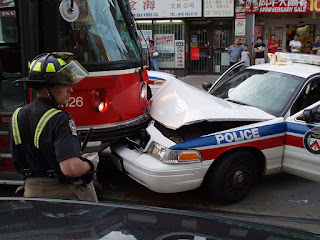 A metro Vancouver resident originally from Edmonton wrote in to the Vancouver Province and pointed out that the Edmonton LRT is a bad model. He admitted working on the line as an apprentice. The letter published in the paper claims:

"I do not use public transport and also live north of the Fraser in Mission, thank God. But I have seen the devastation of badly planned light rail transit first-hand in Edmonton."

"Returning there after a 30-year absence was shocking. The gridlock, traffic and pedestrian chaos, improper software compatibility with existing systems, bad contracts, no accountability on anyone, and emergency vehicles unable to enter a hospital while the train is running is all bad. I worked on the infrastructure as an apprentice electrician and thought LRT was a great idea, but it was just poorly executed in Edmonton."

Recenly a pedestrian was killed by the LRT in Edmonton. Aside from the usual problems other cities have involving traffic accidents with the on ground railway, reducing 104th avenue to a single lane of traffic each way is insane. That is a huge step backwards not forwards.

Toronto has had its share of traffic accidents between streetcars, buses and even police cars as has Paris and San Fransisco. Skytrain avoids all of those problems.