The Stairway to Heaven 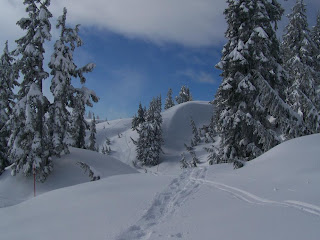 Surf’s up. Last night the mountain snow report said they just got a meter of snow in the past 48 hours and 1.32 meters in the past week. So today I couldn’t resist. I knew visibility would be patchy but just like in surfing, when there’s that much new snow on the mountain, ya gotta check it out so I drove up to Seymour. 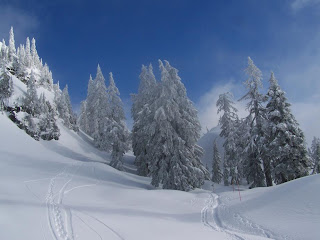 Thankfully there has been quite a bit of snowshoe traffic up the mountain so the trail was soft packed. Snowshoeing up a mountain knee deep in fresh snow is hard work. Been there, done that. On the ski slopes the groomer packs everything down so it’s hard to tell the difference between a meter of fresh snow and 6 inches. That’s why people go out of bounds and that’s where they get into trouble. More from all the cliffs and gullies than the avalanches. 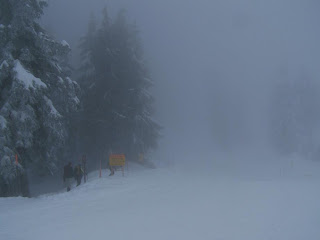 There was no visibility starting off. Climbing into the unknown. Yet we know the trail so it’s not really the unknown. I get to the top of Brocton Point and talking with another snowshoer say I wonder if we’ll get any visibility today? I look around and say. Perhaps. It could go either way. I sit down for a juice break and the sun breaks and the majesty is revealed. It made me think of Led Zeppelin’s climbing the stairway to heaven. 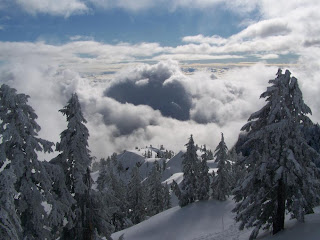 You could see the clouds rolling in after the break. 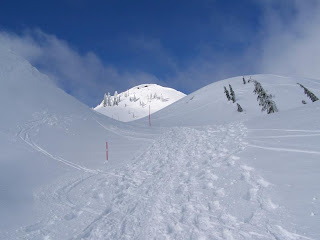 So I kept climbing trying to beat the clouds. 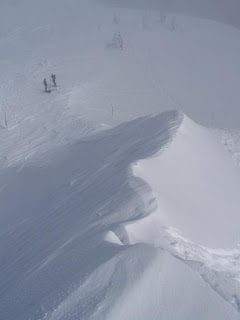 Visibility at the top was very limited. After a short break in the clouds I made it to second pump. Visibility was limited at the top and a two minute break revealed third pump from second pump. 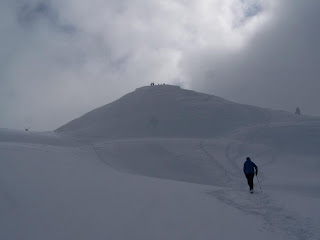 This is the other side of first pump. 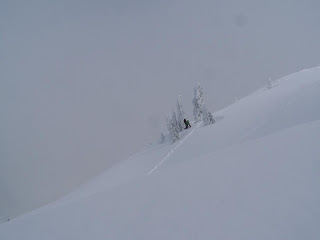 This is heading down and up to second pump. You can see visibility is getting limited. The trail along the side of second pump to third pump is dodgy at the best of times. Today after a meter of fresh snow cutting across that steep slope the route was inaccessible. Below first pump visibility was better. I’m gonna try and get some more pictures on that flicker account I made. Sometimes ya gotta stop to smell the roses. Or in this case climb the stairway to heaven and enjoy the majesty of life. Sometimes it's not visible but it's still there. When the clouds break and the light shines that's magic.