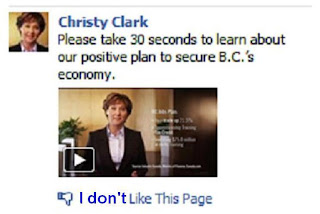 These political ads are completely out of control. Now even Adrian Dix has started in response. There is nothing Adrian Dix could possibly have done in his past that could ever come close to what Gordon Campbell’s liberals have done and keep doing on a regular basis. This new tradition of political ads when there is no election is absolutely wrong.

During an election political candidates and parties run commercials promoting their cause. There are rules that govern how much they are allowed to spend on advertizing during an election. Now they are breaking those rules by advertizing when there is no election and using tax dollars to do it. Double trouble.

The cost of all of these ads need to be tabulated and subtracted from how much they are allowed to spend during an election. The political ads that are paid for with tax dollars need to stop. Taxpayers associations need to file a class action lawsuit against the offending parties. Top of the list is Stephen Harper and Christy Clark. Adrian Dix has just recently started to counter balance their attack ads.

This is fraudulent use of tax dollars. The most glaring example is how Christy Clark ran a political ad promoting herself during the previous Super Bowl. That costs a lot of money. Where did those funds come from?

Let’s face it, Gordon Campbell left office with the lowest approval rating in the country. Christy Clark in just the interim leader of that party trying to make everyone forget what a horrible job they did under Gordon Campbell’s leadership just like Kim Campbell. Only it’s not working because everyone remembers what the BC Liberals did with Gordon Campbell. Political ads paid for with tax dollars are totally offensive.

When are they going to stop collecting the HST? We already had the referendum. Yet they keep collecting the HST and keep spending the money. We need to sue the BC Liberals for still collecting that tax as well as for spending tax dollars on their bogus advertizing. Resolving the matter in the courts is the only way now because they refuse to listen to reason.

I looked down and see one from Christy Clark. Wait a minute says I, I know I don’t have Christy Clark on my friends list. Why is her profile page on my friend’s feed list? None of my friends posted it. It just said suggested site. Now this isn’t on the right hand coulomb with all the other advertizing, this is in the feed section.

God knows Christy Clark has a million stupid facebook ads on the right hand coulomb of facebook. Again she is using tax dollars to fund her dismal campaign while she refuses to implement the HST referendum. This was an ad in my friend’s feed section that she obviously paid more for. This has gotten completely out of hand.

Commercials during election time are tabulated and subtracted from the politician’s allowable election expenses. Commercials when there is no election need to be subtracted from what they are allowed to spend during an election as well. Political commercials paid for with tax dollars need to cease and desist. Stephen Harper and Christy Clark need to be sued in court by the Canadian tax payers to get those tax dollars back. Right now they are committing fraud. 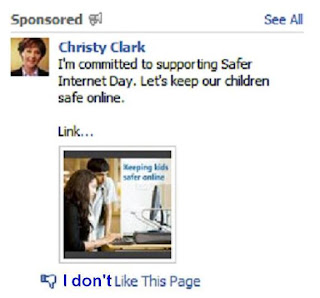