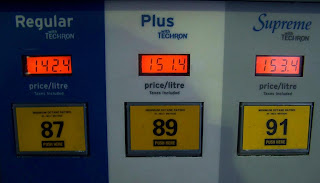 I stopped to fill up on gas before I headed out to the mountain today and was shocked to see a ten cents a litre jump in price. This is the epitome of greed and gluttony. We were thrilled to see it finally go down to the 120’s per litre yet that was another scam that had nothing to do with supply and demand. They raised it in the summer just because they could and dropped it down after summer just to throw the dog a bone so to speak. Now they’ve raised it twenty cents a litre, ten cents a litre more than the peak of last summer’s high “demand.”

This price fluctuation has nothing to do with the price of oil on the market or the laws of supply and demand. It has everything to do with Corporate Communism that has attained a monopoly on the market and is grossly subsidized with tax dollars. People complain that in other countries that produce oil, the price of gas at the pump in that country is quite low. It isn’t here because they are shafting us with their monopoly just because they can.

In 1909, the US Department of Justice sued the Rockefeller’ Standard Oil under federal anti-trust law, the Sherman Antitrust Act of 1890, for sustaining a monopoly and restraining interstate commerce. Now the government is throwing them tax dollars to assist their monopoly and lets them screw consumers at the pumps because they get kickbacks in campaign contributions.

I think it’ time to Nationalize Canada’s oil. They have shown that they can’t be trusted now that they have already eliminated a free market. Might as well have some of those profits go to building schools and hospitals while we control the price at the pumps for local consumers. They cry fowl and claim that’s Communism but in reality Corporate Communism is exactly what they’re doing.