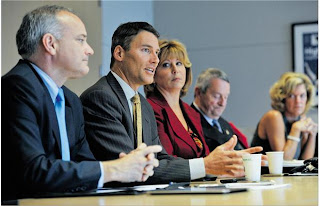 This is it. Proof the Metro Vancouver Mayors' council is completely out of touch with reality and should be disbanded. Delta Mayor Lois Jackson wants to save “millions” of dollars by studying options to replace Transit Police with bus route and station security guards, backed up by existing local police.

Let’s recap. We just finally got armed Transit Police on Skytrain. We did that for a reason. Creating that system then disbanding it makes about as much sense as spending money on widening the Port Mann Bridge only to spend more money on tearing it down after they scrapped the idea of twining it in favour of, you guessed it, another plan that cost way more money.

The last brain storm these power hungry gluttons came up with to justify their existence was to implement a regional sales tax. Above and beyond the billion dollar gas tax already in place. I quoted an old article in the Vancouver Sun where an MLA called for the dismantling of the GRVD because it was a waste of tax payers money. 26 years later and nothing has changed.

Less government is always better. Duplication costs more money. Skytrain sucks. No offense. There are no express trains running from the suburbs to the City. One track, stop and go. That’s the system in place. Changing that now would cost too much money. Turnstiles that function are urgent. Giving free rides is bad business. Bus drivers giving 2.5 million free rides a year is insane.

There is no reason Transit can’t make money. Giving free rides by running a business on the honour system is bad business. No private company would dream of such nonsense. If you want sky train to deal with it’s debt and start making money, then stop building so many lines to Timbuktu and stop giving free rides.

When you build a new line, that costs money. It takes time to repay that expenditure. Instead of taking the time to repay those expenditures, they keep building new lines to nowhere. That creates a perpetual debt that is already being off set with a huge gas tax. Clearly the mayors’ council is the problem. They all want more for their area. Stop spending money and stop wasting money on extravagant duplication.