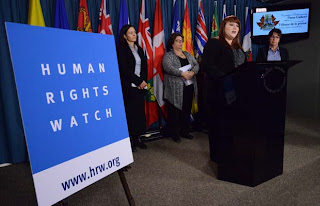 CBC is reporting that New York-based Human Rights Watch released a report today at a press conference in Ottawa claiming that police abuse of aboriginal women in BC included threats, torture and sexual assault. The report calls on the federal government to launch a national inquiry. First of all, a public inquiry isn’t what Wally Opal just did in the Missing women inquiry. He shut the inquiry down as soon as the Hells Angels were mentioned and banned key evidence from being admitted.

Two researchers - one from Canada and one from the U.S. - spent five weeks last summer in the province’s north, visiting 10 communities between Prince George to Prince Rupert and hearing accounts from aboriginal women of alleged mistreatment at the hands of police.

The report suggests some of the accounts of harm done to women and girls appear to be the result of poor policing tactics, over aggressive policing and insensitivity to victims. It documented eight incidents of police physically assaulting or using "questionable" force against girls under 18.

I did see a youtube video of an aboriginal girl in BC who was arrested and sitting in the back of a patrol car. She was freaking out. Perhaps she was innocent and panicking what would happen if she was taken away by the police. Perhaps she was a spoilt brat throwing a temper tantrum. I don’t know why she was arrested.

All I saw is her kicking the window in the back of the car. The officer said if you don’t stop that, you will regret it. She kept it up, so he opened the door and punched her in the head. Yes it was shocking. Normally when a kid throws a temper tantrum you let them kick and scream until they tire themselves out. Punching a young girl in the head was shocking.

The report also contains troubling and graphic allegations of physical and sexual abuse, including from a woman, identified as homeless, who describes how police took her outside of town and raped her. Rhoad said the woman told her the officers then, "threatened that if I told anybody they would take me out to the mountains and kill me and make it look like an accident."

In the missing woman inquiry, sex trade workers claimed police officers blackmailed them into having sex. They claimed the police officers said if they didn’t have sex with them, they would arrest them for solicitation. Guess where those allegations went? Right under Wally Opal’s carpet of denial.

There is no excuse or rationalization for rape. If that happened, that was inexcusable. We know that it did happen in Prince George with Judge Ramsay. He was convicted of sexually abusing under age aboriginal women. No doubt there was a huge amount of rage and denial before that conviction was obtained.

I do remember there were allegations at the time of police officers helping to cover up Judge Ramsay’s crimes as well as allegations of some officers being involved in some of those crimes. I also remember a RCMP officer suing the RCMP for investigating him for abuse. I kid you not. Surely if the allegation was made he’d want to be investigated and exonerated. I believe it was during a custody battle with his ex wife and it seriously affected his case in that proceeding.

Stephen Harper is a heartless antichrist. His response is just do it. File charges. Kinda like Catherine Galliford and all the women in the RCMP who have filed a sexual harassment complaint on court? Harper’s response was to deny everything, slander the victims and blame them.

"Human Rights Watch was struck by the level of fear on the part of women they met to talk about sexual abuse inflicted by police officers." No wonder.