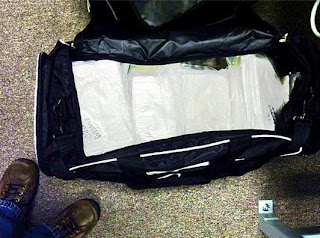 Around 7:45 AM Saturday policed noticed a suspicious 24 year old loitering in a Clearbrook Road parking lot with two locked duffle bags. After providing answers to the police that did not make sense, the police searched the duffle bags and found 60 kilos of cocaine inside.

That is a huge haul. The largest cocaine seizure to date in Abbotsford. It’s amazing what all the round the clock police protection for the Bacon brothers and their associates buys. The unnamed suspect is from out of province. I’m not sure why they’re not naming the suspect or saying what province he’s from. Looks like we still have a ways to go yet in police transparency.

Dec. 6, 2010 an Abbotsford man named Curtis McLay was caught outside a restaurant in Bellingham with 184 kilos of cocaine he planned on smuggling into Canada. He was sentenced to 10 years in a U.S. prison last May.