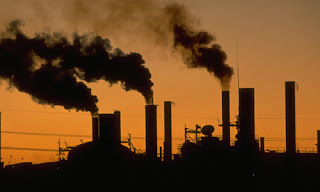 There’s a lot of talk and a lot of controversy over waste to energy incinerators these days. Burnaby already has one. Vancouver just turned one down and Godzilla is talking about bring one to Surrey. Kinda like Gordon Campbell’s gold plated pension he originally campaigned against. Oh it’ll never happen. Much.

Turns out there’s plans to build a giant incinerator by Aquilini “Renewable Energy" in the Campbell Heights Industrial park. We remember Campbell Heights. That’s the epicenter of money laundering for the dirty developers that contributed to the BC Liberals.

Flipping agricultural land into industrial so some insider campaign contributors can make a quick buck is one thing, but building a garbage incinerator on agricultural land is another. I’m sure the neighbors are thrilled. Just another lie and broken promise from the mighty Godzilla. Go Godzilla.

Kinda fitting they’ll have smoke stacks from a giant incinerator behind the giant statue of Gordon Campbell at the industrial play park. Kinda like having a giant shredder in the BC Rail investigation. We’ll pollute Surrey First, next the World. Surrey Shirts should do that one next. 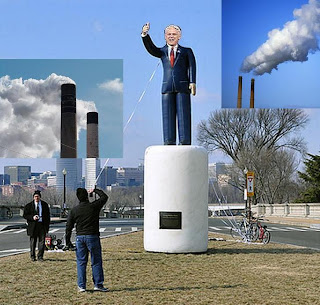 When I fist hear about the idea I think wow can they really do that? Turn garbage into energy? Then I find out they’re just talking about an incinerator that burns the garbage and generates some electricity on the side. Like burning toxic garbage doesn’t have any real concerns.

I like the back country for two reasons. Seeing mountains as far as the eye can see and seeing clean air. Looking at the city from the mountains used to be nice. Now you can’t get a photo of the city at any time of the day without seeing several factories billowing smoke out into the air. The Fraser Valley, surrounded by mountains has become a grey haze of air pollution.

Everyone wants jobs and wants us to prosper and make money. Yet there is good business, bad business and a whole lot of gray areas in between. With news of the Great Pacific Garbage Patch where the ocean currents are collecting plastic garbage into huge islands that decimate wildlife, people are becoming more aware of their environmental foot print so to speak.

The Green Party is an example of an increase in public concern about the environment. In response politics becomes very polarized. We have some people prioritize protecting the environment while others, like Stephen Harper are consciously going in the exact opposite direction in open defiance of those concerns.

Reducing landfills is good but creating more air pollution anywhere, especially in the Fraser Valley is not. CO2 emissions is a huge concern. Getting rich killing the planet is very counter productive. We can’t take that money with us to the grave. Words like sustainability aren’t just for granola freaks, they are for every responsible citizen now.

Incinerators create air pollution. They say it’s OK because the Burnaby plant is within acceptable limits. Yeah, who’s limits? It burns toxic garbage and gives off pollution. Who said how much pollution is acceptable and how much is not? Air quality in the Fraser valley is a very real concern.

Environmentalists are celebrating a “victory” in the cancellation of a proposed incinerator in Vancouver. So once again they want to bring another failed Vancouver project to Surrey. However, the celebrations are premature. The company expressed a concern about the government making a decision that protects the environment because it is a violation of NAFTA chapter 11. They’re quite right.

These insane clauses in these ridiculous trade agreements have nothing to do with free trade. Companies who plan to pollute the environment sue the government for preventing them and get millions of dollars in compensation from a NAFTA tribunal. That compensation is in tax dollars. Which is not very fiscally responsible.

We need to trash these insane trade agreements that have nothing to do with free trade and stop awarding compensation of tax dollars to companies who want to pollute the environment. Removing our democratic rights is never a good thing. Neither is polluting the air we breathe.