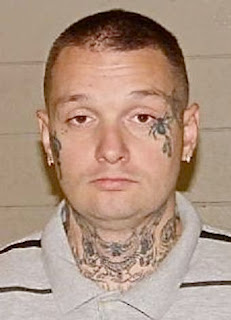 *OK this is a pretty confusing case. I'm going to have to do some more work on it.* John Garry Shanks becomes police informant. Well this guy looks like a real winner. Here we have a drug dealer in Cranbrook with an extensive criminal record and he’s the one that becomes the police agent. Go figure.

This case is the tragic story of a double murder in Cranbrook where they murdered the wrong people who rented the home after the rival drug dealer they were trying to kill moved out. It is of course tied to the Hells Angels. One of the accused Chad Munroe, was an associate of Mission Hells Angel Jason Arkinstall. The investigation is referred to as E-Portamento.

The accused were involved in the drug trade in Cranbrook. The object (of the murder) was to control the drug trade in the East Kootenays. The target was a rival drug dealer named Doug Mahon who had been charged with shooting Hells Angel associate Chad Munroe back in 2009. The trial is scheduled to continue Thursday.