To live and die in LA 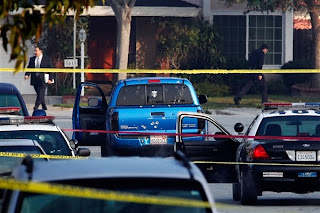 On blog reader sent in this picture and story about how the LAPD opened fired on a car driven by two innocent women delivering papers just because they thought it looked like a car of a wanted felon. They didn't even match the plate number. There’s a whole series of problems here. Shoot first ask questions later is a violation of the constitutional right to a fair trial, as well as the protection from arbitrary searches and seizures. I don’t think they actually wrote in protection from arbitrarily getting shot by the police in the constitution, but the intent is clearly there.

“Two women who were delivering newspapers in Torrance, Calif., early Thursday were shot by jittery Los Angeles police officers who mistakenly thought cop-hunting fugitive Christopher Dorner might be in their vehicle, NBCLosAngeles.com reported. One was shot once and the other twice; both were expected to survive.” 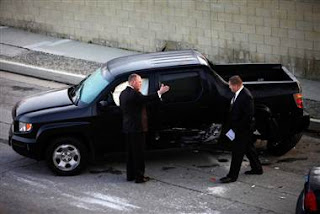 “Less than a half-hour later, cops fired on another vehicle in Torrance, just two blocks away from the first scene, NBCLosAngeles.com reported. No one was injured in that vehicle, which was similar to Dorner's truck, police said.”

Clearly police are somewhat tense because they are looking for a former LAPD officer who has gone nuts and started killing people in revenge for being fired. It’s like the old stereotype of a disgruntled postal worker coming back to work to shoot his coworkers after he was fired. You’re angry about getting fired so now you’re shooting people. How is that supposed to get your job back?

In this case the former officer claims he was unjustly fired and wants to clear his name. If he was unjustly fired then that injustice can be addressed through the courts or public activism. Killing innocent people will not clear his name. It will just destroy his name even if he was initially fired unlawfully. Especially when he targets the family of former coworkers. There is nothing good or noble about that. It is the murder of innocent people. If a coworker did something wrong, murdering their family members is worse.

So we have two problems. An armed and dangerous nutbar on the loose and a past history of police corruption within the LAPD. Which in turn opens Pandora’s box. The Rodney king beating on video was but one example. We currently have an ombudsman of sorts in our new police watchdog organization who claims he has past history of dealing with police corruption in LA. The Mike Rupert case is another that comes to mind.

The blog reader who sent the story in has their own account of dealing with police corruption there. It’s a complicated problem that isn’t going to be properly addressed let alone resolved in one blog post. In Canada our problems seem small in comparison. Here we have police that will give someone the boots or flee the scene of a drunk driving charge. Which happened yet again recently in Durham.

Here in Canada we have a lot of police officers getting drunk driving charges. So much so it is clear that over all the police in Canada have a drinking problem. Which is why they should not have bars on site anywhere in Canada. Especially in Surrey.