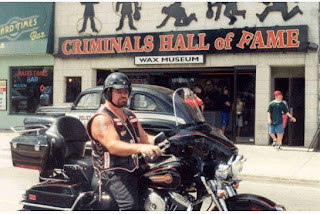 The Toronto Star is reporting that Toronto Hells Angel Billy Miller and five alleged associates face a string of gambling charges after police busted an invitation only Super Bowl party at a Markham banquet hall.

Police claim Billy Miller and his associates are all connected to Platinum SB, an offshore betting site in Costa Rica with an active client base in the GTA. Supt. Paul Pederson of York Regional Police said funds from illegal gambling are funneled into criminal rackets such as drug trafficking, extortion and prostitution.

Facing charges of engaging in bookmaking, participation in a criminal organization, keeping a common gaming house and conspiracy to commit an indictable offence are William Miller, 49, Arno Thomsen, 45, and Shlomo Buchler, 40, all of Toronto; Martin Spruce, 45, of Vaughan; and David Hair, 44, and Andrew Bicelli, 48, both of London, Ont.

At the news conference Finn alleged that Antonio (Jelly) Borrelli was a Platinum SB debt collector in 2004, when he paralyzed GTA mother of three Louise Russo with a stray bullet he fired into a North York sandwich shop. It’s alleged he was firing at a mobster with $240,000 in gambling debts. That’s the hit that Hells Angel Paris Christoforou and his associate Mark Peretz was involved with along with Peter Scarcella and Antonio Borrelli. Borrell was just released on bail last December while Christoforou, Peretz and Scarcella were released earlier last year.