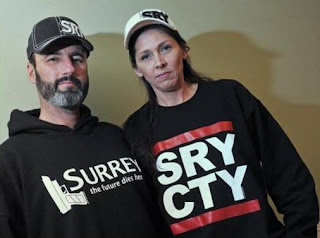 I was cautious about the shirt with the City logo saying Better safe than Surrey. Yet this other article is quite right in that “Copyrighted material is, of course, protected by law. But so too in Canada are parody and satire of copyrighted material.” Evidently City Hall’s lawyer is back tracking and said they aren’t going to pursue the matter in court they just send a legal letter.

So why send the letter? To be bullies and try and scare the sole proprietor knowing they don’t have a real case in court. I find it highly ironic and highly offensive Surrey First is promoting the No Bullies day when they themselves are the biggest bullies in the city. So get your red hot satirical shirts from Surrey shirts dot com.

The Globe and Mail finally picked up on the City of Surrey’s development corporation story: “Michael Geller, a well-known development consultant in Vancouver, was on the Surrey corporation’s board. He quit because he got uncomfortable about some of the deals the corporation was considering…”

“But he doesn’t support cities developing their land with the explicit goal of making money, as Mr. Cox has said Surrey’s corporation has. “That’s where we part ways. There’s not only the appearance of a conflict of interest. There are going to be conflicts.””

No kidding. This isn’t about risky investments. It’s about conflict of interest. Their sole purpose is to make money and they are the ones making decisions on flipping agricultural land into commercial. Like the Gateway Casino proposal and just like Campbell Heights Industrial Park.