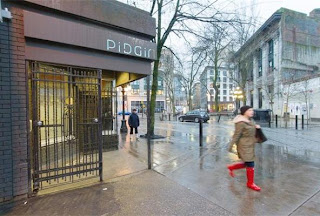 Front page of today’s Vancouver Province is an article about some East Van bullies picketing a restaurant in East Van just because. They are opposed to the gentrification of East Vancouver because they want it to remain a drug dealing sex trade toilet.

Back in the day, people used to protest closing down East Van slum lord mansions because they were rebuilding them and charging more money which made it unaffordable for the previous tenants. Durring Expo many of those concerns had merit. However, times have changed.

Now Vancouver is approving mixed development sites. These are new condos that include social housing and affordable housing. It’s a win win situation. Instead of a vacant building we have new social housing and new affordable housing in a nice new condo. It is great for the homeless. I’s just bad for the drug dealers. The bullies claim that these kinds of projects will clean up the East end and drive their customers out. That is their real concern. If they were genuinely concerned about the homeless, they would be applauding new buildings with social housing units in them.

The people complaining about the mixed development sites are the drug dealers who don’t want to lose business when the neighborhood is cleaned up. Any homeless activist would be thrilled to see the homeless get nice housing instead of a slum lord mansion where drug dealers like Tony Terezakis use extreme violence on the tenants.

In the article it quotes one resident who said “I’m really surprised they are picketing here,” he said. “I’d say 90 per cent of the people who live down here can’t figure out why these idiots down here are protesting. They have this communist rhetoric going on.”

Simon & Garfunkel once said the words of the prophets are written on the subway walls. Well New York might have graffiti proof trains now but East Van doesn’t. This is a picture of some revealing graffiti in Eat Van. It says “I’m scared too, but we’ll make it.” People in East Van are scared. They are being terrorized by bullies. Drug dealers are violent predators that prey on the most vulnerable. 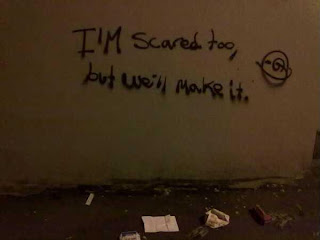 Tony Terezakis filmed himself beating the life out of drug addicts that owed him money. Now we see women being pushed out of windows or brutally raped and beaten into a coma for drug debts. How did those drug debts happen? The first rule of drug dealing is never front someone drugs. So here we have predators that give people drugs for free and then beat the life out of them for payment. Here’s another picture of a prophetic warning in East Van. 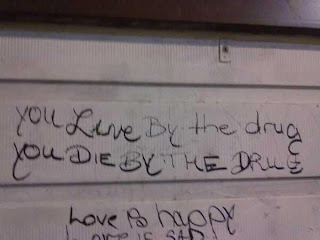 It says “You live by the drug, you die by the drug.” I guess that wasn’t written by the drug dealers at Vandu or the bullies picking on the innocent customers of the new restaurant. It was written by someone who lives there. Someone who feels the fear and sees the violence these drug dealing predators bring.

We need to stop catering to the bullies. They are not the 99%. The real problem is that there are no mixed development projects in Surrey. Not at all. No social housing, no affordable housing and next to no rental units. That is a valid concern in Surrey. In East Van we should be applauding mixed development sites and anyone who steps up to make it a better community for everyone.