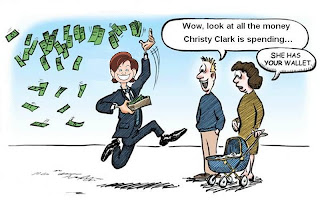 Christy Clark is ready to give away millions of tax dollars and thousands of hectares of land to one native village on Vancouver Island as well as forestry rights and the right to self government. I kid you not. Self government means their chiefs become kings and queens and the members of their reservations have absolutely no rights whatsoever.

I know this is a sensitive issue but we really need to start using our brains here. Clearly we have abandoned reason up to now. Currently there are many outstanding land claims. In fact since each village can’t agree on what land was theirs, the outstanding land claims are for all of the land in BC and then some.

For example, at the public hearing on the Surrey Mega Casino, a member of a local First Nations village spoke. She expressed her concern about the proposal and objected to the fact that their village wasn’t getting any money from it. She cited how in other provinces, the provincial government automatically shares a portion of the gaming revenue with the First Nations.

Most importantly, she outlined her village’s land claims and admitted another village has also put a claim on some of the land they claim. In essence there is over 150% of BC up for grabs. Sorry to say, only 100% of BC exists and we need to coexist with all the other residents.

All of us came here from someone else. Including the First Nations community. Yes they were here before the white man so to speak but this isn’t about the white man any more. It’s about equality for every race colour and creed that now lives here. We all have rights and we all must share this land. Chief Seattle said land ownership was a white man’s concept.

I talked about the Idle no More movement and expressed my concern about one group of people setting themselves up as better than another group of people. Especially when they claim they don’t have to work or pay taxes and we have to work to support them. That is wrong.

If you don’t want to pay taxes, then I guess you don’t want to drive on roads, use electricity or the plumbing those taxes paid for. Yes there were injustices in the past. The residential schools were horrible. Judge Ramsey’s sexual abuse of under age aboriginal women was inexcusable. That doesn’t mean we are supposed to throw away the constitution and make one group better than all the others. That is not a free republic.

In Central America, there are plenty of aboriginal people. You don’t see any reservations there. The aboriginals live with the rest of society. They have to work and provide for themselves just like everyone else. Everyone is equal. I don’t like to see anyone get shafted including members of the First Nations community. But let’s face it, to say they own the whole province and then some and we have to rent it from them is wrong. There’s a reason we have the queen of England on our money and not the king of France. There was a war and the French lost. Yet we share this land with the French and everyone else who lives here.

Let’s face it, historically we did business and were friends with some tribes but not all tribes. Some tribes were mean bullies that exploited other tribes. We didn’t have treaties with everyone. We can’t give every native village everything they want because that’s more land than exists.

On top of that, why is Christy Clark giving one village millions of tax dollars? The use of land is one thing, handing over tax dollars is another. For the record, self government is insane. That means the chiefs become rich kings and queens and the members of the reservations have no rights at all. It also means they can legalize crack and have their own crack houses on the reservations for people to come to and our laws can’t stop them.

Self government sounds like a good thing but it’s not. It sounds like self determination but its not. Those words have legal meaning and the inherent right to self government means their chiefs become kings and queens and the charter of rights has no jurisdiction to protect the rights of the members of the reservation. This is just Christy Clark spending more money she doesn’t have to try and get reelected just like Gordon Campbell’s BC Hydro rebates only MUCH worse.

The inherent right to self government means that a tribe could say, historically we used to raid that other tribe and make them slaves so we are going to retain our historical right to keep slaves and your laws that ban slavery have no jurisdiction now. Great thinking Christy. Not.