A Salute to Mike Ruppert 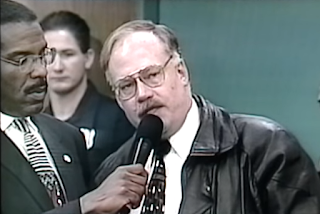 When I recently posted an overview of where this blog has been and where it is going, I said when I first started blogging I was a lone voice in the wilderness preaching Gary Webb. However, there was one other - Mike Ruppert. Mike ran a blog From the Wilderness and was a passionate supporter of the Gary Webb story. He died of a suspicious suicide just like Gary Webb.

When the Gary Webb story broke, it went viral. People were outraged. The Director of the CIA held a town hall meeting in LA to do damage control. At that meeting, Mike Ruppert said: "I will tell you Director Deutch that as a former Los Angeles police narcotics detective that the Agency has dealt drugs throughout this country for a long time." He then refers specifically to three CIA Operations: Amadeus, Pegasus and Watchtower. I have written about Watchtower which was confirmed by former US Navy Intelligence Officer Al Martin. Chip Tatum referred to Pegasus.

Mike Ruppert claimed that while he was a narcotics officer in the LAPD the CIA approached him to sell drugs. He refused and when he tried to blow the whistle on that operation he was chased out of the LAPD. History has shown how all whistle blowers undergo character assassination.

Mike Ruppert believed 911 was an inside job. So do I. So do many architects and engineers in the field of controlled demolition. Mike was passionate about many things. I do not believe he committed suicide any more than I believe Gary Webb committed suicide or Dr. Kelly, the British weapons inspector in Iraq that blew the whistle on MI6's false press releases to the media about Iraq's WMD they didn't have. It's pretty easy to fake a suicide note.

The bottom line is that Mike Ruppert was another witness of the CIA's long time involvement with drug trafficking. There have been many others. There are too many witnesses to silence because their testimonies continue to speak out after they have been killed. Crack the CIA.