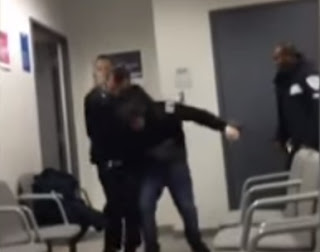 CBC is reporting that "Quebec's police watchdog is investigating a shooting at the courthouse in Maniwaki, Que., in which an 18-year-old man was seriously injured when he was shot by a special constable. According to a BEI news release, the teenager seized a baton from the special constable during the altercation and hit him with it. The investigation is ongoing, but the statement said the special constable then fired his gun, shooting the man in the head."

"An officer with the Sûreté du Québec (SQ) said both suffered serious injuries and have been taken to the hospital, though the extent of their injuries is still unclear. A witness to the incident posted a video on social media appearing to show the scuffle between the constable and the 18-year-old prior to the shot being fired. In it, people in the room can be heard saying, 'Put down your gun.' Others can be heard appealing for calm in both English and French."

That was disgusting. That officer needs to go to jail and NEVER be employed in that service ever again. 5 officers couldn't restrain one kid so they shoot him in the head. That is obscene.