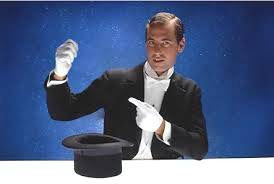 Last week the New York Times reported that "The Israeli police recommended on Tuesday that Prime Minister Benjamin Netanyahu be charged with bribery, fraud and breach of trust, casting a pall over the future of a tenacious leader who has become almost synonymous with his country. The announcement instantly raised doubts about his ability to stay in office." At the time he refused to step down and vowed to run again next term.

Today the smoke and mirror magician announced he is going to make all those charges disappear by declaring war with Iran. He figures blaming Iran for conflict the CIA has started in Syria will be a great distraction from his corruption charges. You can fool some of the people some of the time but you can't fool all of the people all of the time.

On that note, today some coworkers told me to watch a movie called Wag the Dog. They said I'd really like it. It's about a president who creates a fake war to distract voters from his own scandal. I pointed to the paper and said that's exactly what's happening here.

Jeremiah was a bullfrog. They didn't like what he had to say so they threw him in jail. Then everything Jeremiah the prophet said came true and Israel was carried away captive into Babylon until Cyrus the Great set them free. They say in Rome, pride cometh before the fall. Well the same thing is true in Israel and everywhere else. Buyer Beware.

Jerusalem, O Jerusalem, may God take from thee thine heart of stone and give to thee a heart of flesh so that you may see how your actions hurt others. Blessed are the merciful for they shall obtain mercy but God Damn the pusher man.