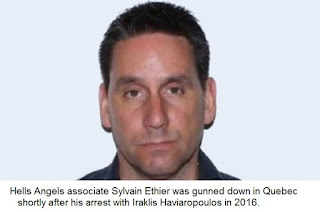 The Montreal Gazette is reporting that "A 41-year-old Brossard man is among five people to plead guilty in an international drug trafficking and money laundering ring stretching through Peru, Mexico, the U.S. and Montreal, it was announced Friday. Iraklis Haviaropoulos pleaded guilty to being the leader of a Montreal-based organization that purchased and distributed more than 300 kilograms of cocaine and laundered more than $1 million.

According to U.S. Justice Department officials, Haviaropoulos purchased cocaine on the northern coast of Peru, where it was picked up by pilots at a concealed airstrip and flown to Guatemala and Mexico. Once in Mexico, the cocaine was trucked into the U.S. and Canada. During the investigation, more than 337 kilograms of cocaine were seized, as well as quantities of fentanyl and marijuana."

In 2016 La Presse reported that Iraklis Haviaropoulos was a Hells Angels associate through Sylvain Ethier who was gunned down in Sainte-Thérèse, north of Laval less then six months after their arrest in this cocaine bust. Sylvain Ethier was then named as the leader of the cross border cocaine ring. Only now he is dead. Et tu, Brute?

Le Presse reported that "According to our information, Éthier is in contact with a member of the Hells Angels of Quebec currently in the Dominican Republic, who would have perceived part of the 20 million profits made by the organization in 18 months, evaluates the police. This motorcyclist would even have returned to Quebec a few times, notably to collect his royalties, but he was not charged in the investigation."

In this cocaine ring, everyone plead guilty and no Hells Angel members were charged, again.

The US Department of Justice reported that "The organization collected cash from selling marijuana in the United States and cocaine in Canada." Why weren't they selling any of the cocaine in the US? That's because the US crack epidemic ended in the /80's. It is now rampant in Canada because we refuse to implement the New York model and are running around handing out free crack pipes promoting addiction.

The CIA created Pablo Escobar just like they created Manuel Noriega and El Chapo. After the CIA screwed over Pablo Escobar, they started using the Cali cartel. Arresting any Hells Angels in this case would be as pointless as arresting any other drug mule. The CIA are the ones behind it. We need to arrest them or it will never stop. The point of this bust is not to disrupt street level drug trafficking. The point of this bust is so that the government can seized the proceeds of crime.

Iraklis Haviaropoulos was originally from Lebanon. The CIA murdered Major Charles McKee from the US Defense Intelligence Agency on his way home to testify about the CIA's drug trafficking in Lebanon. We need to confront the drug trafficking on the street not seize the proceeds of crime. That is the New York model.

Watch Kill the Messenger ~ Freeway: Crack in the System