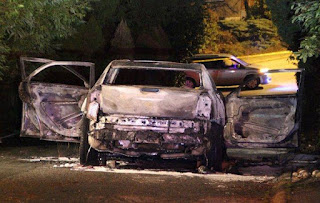 The Tri City News is reporting that "One man is dead after shots were fired Friday night in Coquitlam. Police were called to the 2700-block of Sylvan Place, off of Riverview Crescent, just after 10 p.m. after a report that multiple shots had been fired and a vehicle was seen speeding away. According to a press release from the Integrated Homicide Investigation Team, “When officers arrived, they found a man with gunshot wounds inside a vehicle. The male victim was transported to hospital but succumbed to his injuries." Global is reporting that "A dark-coloured sedan was found on fire nearby at Mariner Way and Dartmoor Drive."

The Peace arch News is reporting that "There was a reported shooting in Newton Friday night. Police were on scene after reports of gunfire around 11 p.m. in the 13200-block of 62nd Avenue. Footage from the scene shows what look like bullet fragments on the road."