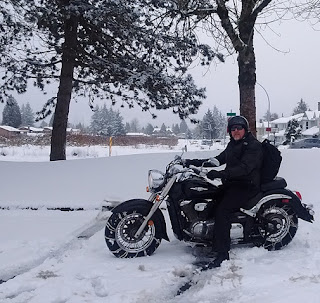 Well, winter breathes it's last breath. Vancouver got a dump of snow yesterday and overnight. It's actually quite nice. This morning I broke down and decided to try a rope trick I learned from an old timer who used to ride full seasons in Prince Rupert. He said he used to wrap rope around the tires in the snow for make shift chains. Old school trumps No school.

I thought it was a cool idea but I wasn't sure how it would work because if you wrap the rope diagonally across the tire, it wouldn't be very effective for traction. However, today I saw a YouTube video of a guy in Wales who made chains for his car out of a rope. He looped it through so that the rope crossed the tire tread horizontally. That made sense.

Obviously chains are better than rope because rope wears out really fast on dry pavement. I tried it out and it worked very well. Yesterday I had zero traction on the side streets but today I could start without having to sit on my back seat for traction. I actually had traction and I could actually brake. So I spent what's left of the snow bombing around on the side streets testing it out. 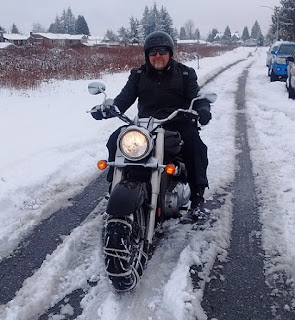 Zen and the Art of Civil Liberty. The future looks bright.