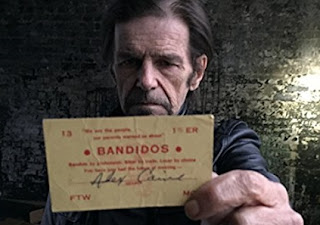 Le Soleil is reporting that Alex Caine is featured on an 8 part docudrama on the French History channel produced by Pixcom in Quebec. I normally distance myself from under cover agents for several reasons. I don't like guys like Charles Falco who was a crystal meth dealer that went under cover to infiltrate Vagos when he got busted so he wouldn't have to do jail time.

Ratting out your friends so you won't have to go to jail is lame. I have also distanced myself from under cover cops who infiltrate biker gangs because they covet the life. Married cops who obsess over strippers and blow are cheap and sleazy. They are no better than the criminals they arrest.

Alex is different. He, like Bob Deasy in Ontario, is sincere. Alex never infiltrated the Hells Angels. He was a camerman for them in Northern California and became a hang around in Arizona until an AFT agent blew his cover. Alex does have an intersting story similar to that of Scott Barnes worth sharing. Alex did infiltrate the Para Dice Riders, the Bandidios, the KKK, a Chinese triad and some terrorist group in Pakistan.

Alex Caine's book Angel Dust: How The Outlaw Biker Gang Became A Criminal Empire devotes ten pages to my blog. It's still a big seller in the local bookstores found in the true crime section. Pixcom's TV series on Alex is in French. Perhaps they'll put it on Netflix with English subtitles. That would greatly increase it's exposure outside of Quebec.