Tolls are an unfair burden on overtaxed motorists 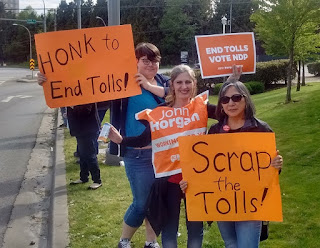 Gordzilla nailed it. Which just goes to show that although no two people agree on every issue, no two people disagree on every issue either. Gordon Clark wrote an insightful column stating that Tolls are an unfair burden on overtaxed motorists. He's absolutely right. The NDP were elected on a promise to remove bridge tolls. For them to turn around and create another toll to replace it would be an act of fraud. Speaking of fraud who fed Derek Corrigan the poison cool aid?

Derek Corrigan replaced Mayor Moonbeam as chair of the Mayors’ Council because he had a more conservative approach to the Translink Fraud that consumed Mayor Moonbeam and Betty Botox. They were the tax and spend ring leaders. Stars of Junkets R Us. So what happened? Why has Derek Corrigan changed his tune and started to sing fiscal irresponsibility? Ah, they gave him a free trip to South Korea. Now he's a junket star too trying to think up ways to raise taxes and spend more money so he can go on junkets with the rest of them. Shame on you.

We need to pick a project, start it and hold off on the other one. Surrey wants the government to be fiscally responsible. Replacing the Pattullo bridge isn't urgent but it is a far bigger priority than this LRT scam which is just plain stupid.

People who drive cars prefer Skytrain to LRT because Skytrain does not impede traffic. People who drive cars should have a say because they pay an extra billion dollars a year in a 10 cents a litre regional gas tax. No private company would be allowed to continue operating a billion dollars over budget every year. I'm not saying do away with the regional gas tax. I'm saying stop it at that and no more tolls. The best way to save money is to disband all these committees mandated to think up new ways to raise taxes and spend money.