US Mercenaries hunt down protesters in Honduras 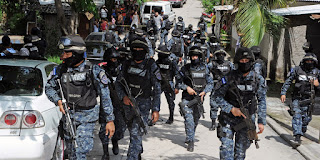 The Intercept is reporting that US trained police are hunting down protesters objection to the recent election fraud in Honduras. They describe one raid in a home with two yong children at 3:00 AM in violation of local laws. What were they looking for? Drugs? Gang members? Of course not they were looking for protesters.

The people of Honduras have been protesting the corruption of the current president since 2015 when he was caught committing social security fraud and was pocketing money from hospitals. Mass protests continued until the recent election fraud. He had lost the election with virtually no possible comeback when the live election results were halted. They announced the army was going to pick up the remaining ballots from rural areas and count them in the capital. All of a sudden the results of the election mysteriously reversed after the tampered ballots where counted. It was obscene and Donald Trump backed the fraud just like Hilary Clinton did in 2009.

The Intercept is reporting that "All in all, security forces carried out 10 raids in the early hours of December 26 and arrested 11 Pimienta residents on charges related to property destruction and assault on police officers in the context of protests against election fraud. TIGRES special forces have been controversial since their founding in 2013, and their short history has been dogged by allegations of theft and corruption involving drug traffickers."

As I previously reported Honduras has been a hub in CIA drug trafficking since Iran Contra. The curent president and his brother are up to their eyeballs in it. Donald Trump is aiding and abetting that drug trafficking in Honduras just like Hilary Clinton did. Say hello to the new boss. Same as the old boss. I'll pick up my guitar and play just like yesterday and I'll get on my knees and pray we don't get fooled again. God Bless Honduras and God Damn the CIA. 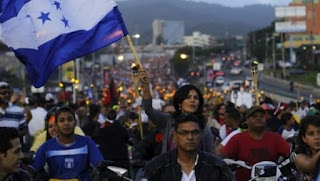