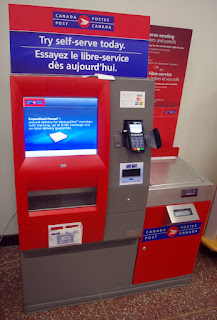 The Huffington Post is reporting that Canada Post Continues To Stand Still As The World Passes It By but that is simply not true. In reality, the Postal union has some great ideas for innovation while Canada Post and the Canadian government let that brilliant opportunity pass them by.

The Union is suggesting we bring back postal banking. That makes sense. Especially in rural areas: #ABankForEveryone Breaking the bank monopoly would be in everyone's best interest.