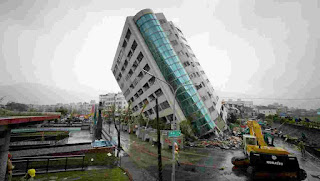 The USA Today is reporting that "At least six people were killed and 76 missing following a strong earthquake near Taiwan's east coast that caused several buildings to cave in and tilt dangerously. Rescuers worked frantically Wednesday to find survivors and free those trapped." 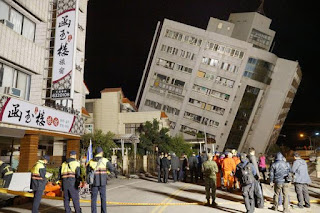 CBS is reporting that "The shallow, magnitude 6.4 quake that struck late Tuesday night caused at least four buildings to cave in and tilt dangerously." It's pretty bizarre seeing these towers tilt at such an extreme angle and remain intact. None of them collapsed at free fall speed into their own blueprint. Imagine that. 9/11: Explosive Evidence - Experts Speak Out.