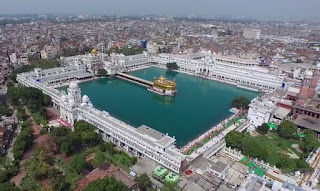 I saw a few pictures at the mall tonight that caught my eye. This one was fascinating. First I thought it was Mecca in Saudi Arabia but it was surrounded by water. Turns out it is the Sikh Golden Temple in India. Nice. We have a lot of Sikhs here in Surrey. I support religious freedom.

I understand Justin Trudeau is in India and recently took a family portrait outside the Sikh Golden Temple. It's nice to see he is visiting religious edifices around the world. It's too bad he is crushing religious freedom here in Canada. At least he takes nice photo ops.