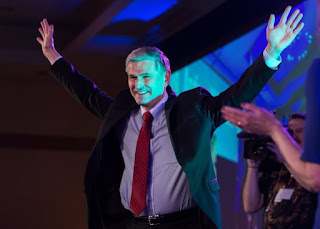 CBC is reporting that "Andrew Wilkinson has been chosen as the new leader of the B.C. Liberal Party, edging out former Conservative MP Dianne Watts on the fifth ballot in a vote Saturday night." Oh happy day. I endorsed Andrew Wilkinson because of his competence. He was a former lawyer and a doctor. He is educated. He was also the former president of the BC Civil Liberties Union which is impressive because preserving civl liberty in this neo con era is important.

"The Australian-born Wilkinson was first elected in 2013 and briefly served as Attorney General before the fall of Premier Christy Clark’s government last year." He has experience.

I opposed Dianne Watts candidacy because of her corruption. "Grant Rice recently tweeted The Dhesa brothers, Sohan & Nahar, defendents in @CityofSurrey civil bribery case had Whalley application approved by #SurreyBC council in June 2010, months after start of #RCMP investigation & @DianneWatts4BC assurance of "preventative measures" after Ian Mulgrew wrote about the corruption case Dianne Watts hid when she was mayor of Surrey.

Andrew Wilkinson has spoken out against the NDP and the Green's insane compromise to use tax dollars for political party funding. That needs to stop. Welcome to the year of the dawg yo. 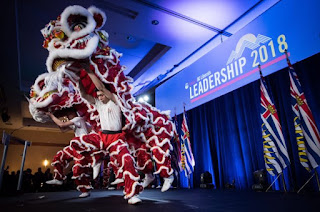 The morning after her crushing defeat Dianne Watts' lapdog chokes on his sour grapes.

Bloody Hell give it a rest. Mike Smyth campaigned for Dianne Watts and lost. Get over it. Stop flooding the MSM with bullsh*t. In today's paper Michael Lapdog asks how can a 60 year old white man win the ethnic vote. AYFKM? His client is a 58 year old white woman. At least Andy doesn't die his hair and do Botox. That's because he is comfortable with who he is.

Mikey makes a big deal about the fact that Andrew Wilkinson left the celebrations relatively early so he could get up early the next morning and get straight to work. That was a good thing. He is a hard worker. At least he didn't stay up late at a drunken gala and run a red light on the way home T-boning another vehicle then lie about it. We need more leadership from leaders not more drunken partying. What was Dianne Watt's claim to fame after she was elected a MP for Harper? She built a new office and didn't show up for work for six months. At least Dianne Watts was able to feign a graceful defeat. Too bad her lapdog couldn't.