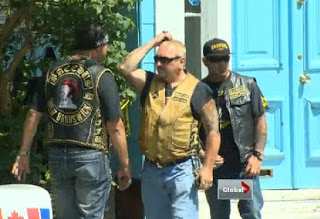 Matthew Foley, 50, pleaded guilty to manslaughter on Thursday in connection with the shooting death of a Saint John man outside of the Bacchus Motorcycle Club's headquarters July 14. He was originally charged with second degree murder and copped a plea.

So we now know for certain Matthew Foley was the one that shot him and is therefore a murderer. Glad we got that straight. However, one thing is certain and it wasn’t manslaughter. He was seen on video pulling out his gun and going after Michael Schimpf. He was then seen returning to reload then going back after Schimpf. That was not manslaughter. He had the intent to kill him and he did exactly that.

Not only that but he shot up the whole neighborhood. That was reckless endangerment. It is a crime not to charge him with that. This case is clearly gang related because the murderer is the president of a gang and the shooting took place outside the gang’s clubhouse. The victim doesn’t have to be a member of a gang for it to be gang related. The shooter was so that makes it gang related.