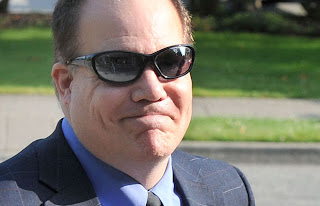 This is another tragic case. The Surrey Now is reporting that former television crime reporter Ron Bencze will be sentenced on Aug. 28 after pleading guilty to sexually assaulting a Surrey boy. The crown is recommending a federal prison sentence of between two and three years for Bencze, who has been on bail since the day after his Jan. 18, 2011 arrest. His lawyer argued for 18 to 24 months of house arrest. That sentence is shameful.

OK so hold the door. If the molestation started when the boy was nine, that implies that it didn’t stop there. It implies that it continued over a period of time and would therefore be more than one offense. He was originally charged with nine offenses relating to three children. So who decided that the charges for the other children shouldn’t be pursued? How can we drop those charges and claim that we have any regard for justice or for protecting children?

So hear we have a case of child molestation that didn’t involve a Catholic priest. It involved a TV news reporter. Recently we heard of a former RCMP officer who died in prison that was sentenced to prison for child molestation.

Bigger news was the Penn State sexual assault cover up. Many people knew about the sexual abuse but they covered it up to protect the University’s football program. Here in Canada we had a hockey coach convicted of sexually abusing young boys. So here we see the church, the police, football and even hockey plagued with sexual abuse. Is nothing sacred? Clearly this does not mean all hockey is bad. It means sexual predators can infiltrate any organization and that children still need to be protected. An ounce of prevention is indeed worth a pound of cure.

Evidence at the trial for Graham James detailed hundreds of incidents of assault. James was convicted and sentenced to three-and-a-half years in prison. Graham James served less than two years in prison before being paroled and released. In 2007 he received a full pardon from Canada's Parole Board.

In the years after his parole, reporters found James living in Spain, where he was an assistant coach with the national hockey team, and Mexico. This is not protecting children.

Sexually assaulting children is like murder. You steal something that can never be returned. It’s not like shoplifting where you can return the stolen item and say you’re sorry. When you commit murder you take something that can never be returned. In the Bencze case one of the victims said “I felt suppressed because I had to keep a secret,” he wrote. “I am trying to live and behave as a normal teenager.” His childhood was “tainted,” he added. “I feel that I have missed out on a childhood that was meant for me.”

We’ve talked about getting a fresh start on life. We’ve touched on rehabilitation. How do we rehabilitate after child abuse. The first step is to come clean and admit the damage done to all the victims not just cop a plea to get a reduced sentence and a pardon. That is outrageous.