Rob Ford in photo with Nazi

When they said Toronto mayor Rob Ford was posing in a photo with a Nazi, I thought they were referring to his picture with Stephen Harper in their recent gun control summit or on their fishing trip. But no, Ford was actually posing in a picture with a real Nazi at last years New Years party.

He claims he didn’t know he was a Nazi at the time, but Jon Latvis, the guy in the picture posted it on facebook and said: “Me meeting with Toronto’s Mayor, Rob Ford to get an endorsement for the Latvian Homeguard - at Toronto City Hall."

One blogger commented on a swastika he noticed on his arm and Jon Latvis threatened to sue the blogger claiming it wasn’t a swastika it was a Cross of Thunder which pretty much looks like the same thing.

In Rob Ford’s defense I don’t really think he is anti Semitic but I do think his political views as well as those of his endorsed pal Stephen Harper are indeed Fascist. They are taking the right to such extremes that they are abandoning every single tradition conservative principle known to man and changing it into something very different. Censorship, warrantless surveillance, Big corporate monopolies, the list goes on. Harper flipped on the bank bail out. Now he looks like he’s flipping on gun control. I think Belinda Stronach had a lot more conservative bones in her body then Stephen Harper. Since Rob Ford refused to blow for that DUI in Florida, I wonder if he shared that blunt he was caught with at the barbeque with Stevie Harper. 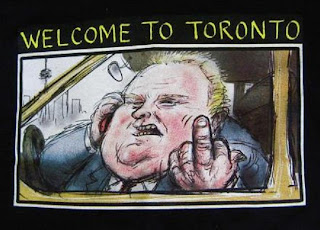