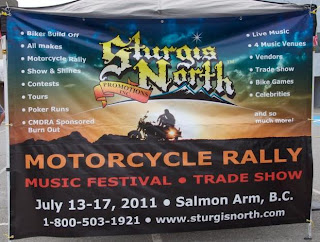 People have been asking me how Sturgis North went. No problems that I’m aware of. The Hells Angels had lots of booths but most of them were at their own function in Saskatoon propping up their drug war out there. Fat Ass Ricky C was panhandling at Sturgis North selling his support your local crack dealers t-shirts. Lots of clown jesters at Sturgis North as well. No one saw Whiterock there this year. They had a booth there last year.

I was surprised to hear it was in Vernon this year. So was Vernon’s mayor. Rightfully so. Last year it was in Salmon Arm. The same town Joseph Bruce Skreptak from the Kelowna Hells Angels was caught in a car load of weapons and a few associates right before that abandon grow op was discovered.

So this year they pick Vernon where the Hells Angels were shown to be connected to the Vernon Greeks violent drug trade. Wonderful. I did hear there is some dissention in the ranks within the Hells Angels in Winnipeg. Some of the Winnipeg Hells Angels are still choked, along with some Alberta members, about giving Ontario control of the northern Manitoba drug trade. Sounds like a meltdown in the mix.

After all, that’s what their gang war in Winnipeg is about with the cross overs who joined the Rock Machine after they killed their own guy from LHS. Unfortunately, they don’t care about them shooting their brother. They are just mad they aren’t getting a cut of the drug profits. Figures. It’s all about the cheddar. The L & R disappeared a long time ago. It’s like Caligula before the fall of Rome. Pride cometh before the fall. It always does.