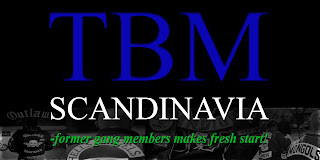 On a much more positive note, TBM is a great organization in Denmark for former gang members who want to make a fresh start in life. They’re hoping to reach out and expand into Canada and the US. They want to create a support system for people to leave the gang life and start a new life.

I’m all for the old fashion principle of repentance. No matter what your past, you have a spotless future. Anyone can change. The key word there is change. As in leaving the old ways behind and starting a new life by embarking on a fresh start. One of the concerns they have is the old timers who are by definition old school, frustrated with the new kids on the block who are solely into selling drugs and making money and have no concept of brotherhood whatsoever.

TBM which is short for former gang members in Danish was formed in 2009 by 27 former gang members (Black Cobras, Bloodz, Bandidos and Hells Angels) in Denmark. TBM are now represented in Denmark, Germany, Norway and Sweden and are working hard to be established in the rest Europe and U.S.A.

Most of them want to stay anonymous. The goals of their organization is to speak to youth in schools about gangs, as well as provide support for gang members to leave the gang life both inside and outside of prison. They also provide support for bikers and gang members to get jobs, education as well as for their families to leave the gang life behind. TBM is also collaborating with different Danish municipalities on hiding former gang members in safe houses and helping them to get on with a normal life. Now that that is brotherhood.