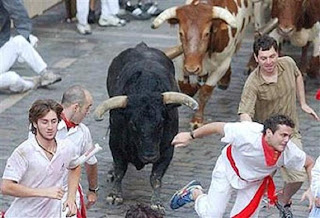 Meanwhile, Spain kicks off it’s annual bull running event as their Chief Judge resigns under similar spending controversies. I guess the bull running event has new meaning now. Not just in Spain but everywhere across the globe we have to run for our lives from the banking fraud bullshit.

I saw that ridiculous Harper attack add last night repeating the same old ridiculous nonsense. This one even had the audacity to claim Mulcair opposes trade agreements that will help the economy. How stupid does this guy think we are? Sending our jobs overseas isn’t going to help the economy.

Making it illegal for the government to protect the environment? Making it illegal for the government to tell the oil sand blasters that they have to clean up after an oil spill or create safety regulations forcing them to build cut off valves in the pipeline? That is irresponsible. The trade agreements that Harper supports do not help our economy. They weaken it and remove our sovereignty. Money talks and the bullshit never stops.