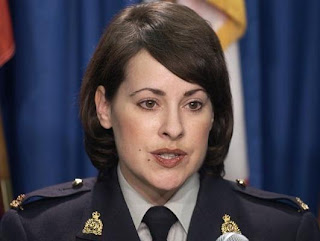 After she filed her lawsuit many other female officers have come forward with shockingly bizarre and similar horror stories. The most dramatic of which is the indisputable case of Staff Sergeant Don Ray who was found guilty of a long list of ongoing sexual harassment and inappropriate conduct. Instead of being fired he was transferred to BC. That case alone warrants a law suit since the RCMP have failed in their legal duty as an employer to defend it’s current employees against sexual harassment. They broke the law for not firing him and have now opened themselves up to legal liabilities.

Instead of settling with Galliford out of court, the B.C. government and Ottawa filed a joint statement of defense this week denying all of Galliford's allegations. Before I get into the nature of the outrageously offensive denial in the statement of defense, I want to be clear as to exactly who it is making these outrageous and offensive claims. It’s not the RCMP. It’s the Christy Clark and Stephen Harper government. That is Ottawa and the BC government. For now.

One can understand the motive for the Christy Clark and the Stephen Harper governments to deny everything and slander the applicant. They don’t want to be found legally liable and have to pay any money in damages. But they are legally liable. This is why things need to change. Catherine Galliford even used the U word. Bob Paulson is a nice guy but has proven ineffective against the old Guard of command culture and ongoing sexual harassment at the RCMP. The Don Ray case is evidence of that. They don’t need any new special powers to fire the guy. Those powers are already there. They have broken the law in not firing him.

"These defendants deny each and every allegation contained in ... the notice of civil claim," says the statement of defense. Instead, the governments paint her as an alcoholic who refused treatment and rejected the RCMP's efforts to keep her away from one of the men she alleged harassed her. Herein lies the first contradiction. If she denied help keeping her away from the offending officer, then they were aware of the problem before she filed her law suit in 2011.

What kind of offer did they give her? Did they say she could be demoted and get a desk job? What if she liked her job? What if she wanted to keep doing what she was doing on the Pickton and Air India cases? Why should she be punished? Shouldn’t the offending officer be the one transferred?

The offensive denial and slander in the statement of defense isn’t surprising. That is Stephen Harper’s MO. He fires whistleblowers then slanders them. Richard Colvin was an "absolutely rock solid" diplomatic staffer who stepped up and volunteered to go to Afghanistan as a civilian representative with Canada's Provincial Reconstruction Team in Kandahar after Glyn Berry, a close friend of Semple, was killed by a suicide car bomber outside Kandahar. When Colvin expressed concern that Canada was handing over Afghan prisoners to be tortured the Harper Government attacked and fired him.

Likewise the Harper Government attacked and fired Linda Keen for blowing the whistle on an unsafe nuclear reactor built on a fault zone after the government neglected to do the necessary upgrades to keep it running. According to MacLeans, there have been at least a dozen cases of Harper firing and slandering whistleblowers. That is a bad precedent for Canada.

The RCMP have absolutely no concept of labour law because they’ve never had to deal with a Union filing grievances and going in front of an arbitrator. As a result they have never seen and do not know the case law or the jurisprudence. Even Bob Paulson, the RCMP Commissioner, has no understanding of labour law. That’s why he thinks his hands are tied in firing Don Ray when they’re not.

Aside from paying Galliford a settlement for damages, things need to change. Sweeping things under the carpet and disciplining officers for going public is not the answer. Obeying the law and firing Don Ray and Jim Brown is. It really is that simple.