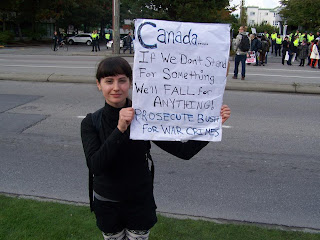 Speaking of George Bush and 9/11, CBC just released the policing costs of George Bush and Bill Clinton's visit to Surrey last year: $45,000.00. Now it is not surprising that hosting any foreign dignitaries would cost money for security. Especially for a war criminal. He would need more protection than a real dignitary. However, if Dianne Watts really did say policing for the event wouldn't cost taxpayers anything, that was not only untrue but unrealistic. Any event where the police are needed costs money.

At first I accepted Dianne Watts response as to why she invited Bush to Surrey. She simply said it's a nonpartisan event and we are inviting famous leaders from around the world. Then when I heard her offensive rhetoric about Bush not being charged for vetoing the bill to stop torture she lost my vote and my support. George Bush and Bill Clinton were the last people on earth to invite to an economic summit. George Bush put the United States trillions in debt through lies and fraud while his pal Dick Cheney became a war profiteer through Halliburton.

The Bush family has a long history of investment fraud. Bill Clinton could speak on money laundering in Mena, Arkansas and how he helped crash the BCCI. Listening to those two clowns we can learn what not to do. I am bitter. We should not have invited them to speak. Then claiming it wouldn't cost taxpayers any money was simply dishonest.

Posted by Dennis Watson at 9:03 PM