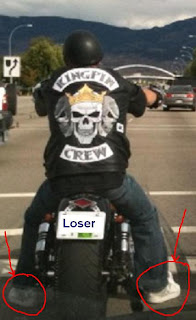 We all know Darryl Wilcox, who has lots of friends who are members or associates of the Hells Angels was arrested for cocaine trafficking in 2005 and is waiting to hear what his sentence is. But do we all know who moved into his house on Westview Way in West Kelowna after he went to jail? Ryan Ennis. One of the guys charged with Cory Montemurro and Uncle Joe racing through Salmon Arm with a car load of weapons and cell phone jammers right before that grow op was abandoned there.

It’s somewhat ironic that Ryan Ennis would move into Darryl’s home after he was incarcerated. It’s as though they knew each other or something. What’s even more bizarre is that they live right next door to two Kingpin Crew Members, Reza Rahiman and Josh Armstrong. We’re told that Reza had to leave Surrey for some reason so unfortunately Kelowna was the recipient of some more Surrey Trash. Our condolences.

I also find it amusing that it turns out this is the second annual Kelowna Summer Jam not the first. Turns out last summer residents of West Kelowna got sick and tired of all the bikes with loud pipes racing up and down their quiet streets with lots of kids that they started putting up posters warning the local neighbors about the new residents. It became quite a cat and mouse game for a while of residents putting up posters and Pinheads tearing them down.

Then the concerned residents started putting up missing cat posters with a picture of a cat instead of the Pinhead logo. Those posters then went on to warn the neighbors about the new residents from the Pinhead crew. The Pinheads didn’t realize the missing cat posters were really about them. Which just goes to show ya, it doesn’t take much to fool a fool. As concerned citizens we can’t do everything but we can do something.