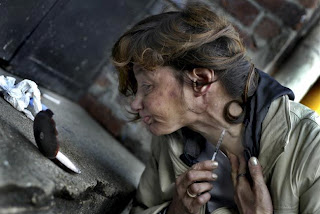 Now that Abbotsford has gangs and drugs, extremists want to continue to profit from that misery by trying to con them into embracing East Vancouver style “Harm Reduction” which is anything but.

Needle exchanges used to be exchanges. You hand in a dirty needle and get a clean needle in exchange. Victoria residents began to complain when that idea was twisted and they just started handing out free needles. The number of used needles that ended up on their property or on school grounds increases considerably.

Even in the article it talks about a guy who is addicted to heroin but doesn’t inject it, smokes it. He grabs 20 needles for his friends without handing in any dirty needles. Does he then sell them? Where do you think those needles end up?

Remember that tragic case of the girl who overdosed at the Vancouver Occupy site? She was given a clean needle to kill herself courtesy of Coast “Health” Harm Reduction. That is just plain wrong. Once again, I’m not the only person that has concerns about needle exchanges and expanding the criminally twisted harm reduction program to Abbotsford. Two other concerned citizens wrote in to the Vancouver Province:

The thought of needle exchanges in our cities just makes my blood boil. Let the drug addicts take care of themselves. Why should we pay for their dirty habits? Next you’ll be giving prostitutes cellphones to “keep them safe’’ on our tab. Most people can barely get by and we are sick of paying for everyone else. Say “no” to needle exchanges. Move the drug addicts out to the wilderness.

First of all, Vancouver and Surrey were not forced to deal with addicts from other towns; they welcomed them by handing out needles, etc. How much longer is the government going to make it easy for addicts? It’s very simple: make using easy for addicts or stand firm and say, “No!” It is as easy as yes or no, life or death. You pick. I’m proud to be a recovering addict and picking life.