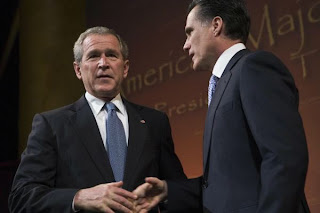 The Vancouver Province is reporting on Mitt Romney’s off shore and Swiss bank account tax havens. That guy’s obsession with the Bush family was the big red flag. The Associated Press is also reporting for nearly 15 years, Republican presidential candidate Mitt Romney's financial portfolio has included an offshore company that remained invisible to voters as his political star rose.

Based in Bermuda, Sankaty High Yield Asset Investors Ltd. was not listed on any of Romney's state or federal financial reports. The company is among several Romney holdings that have not been fully disclosed, including one that recently posted a $1.9 million earning — suggesting he could be wealthier than the nearly $250 million estimated by his campaign.

Sankaty was transferred to a trust owned by Romney's wife, Ann, one day before he was sworn in as Massachusetts governor in 2003, according to Bermuda records obtained by The Associated Press. The Romneys' ownership of the offshore firm did not appear on any state or federal financial reports during Romney's two presidential campaigns. Only the Romneys' 2010 tax records, released under political pressure earlier this year during the Republican primary campaign, confirmed their continuing control of the company.

In contrast, one blog reader sent me a link some articles about the Robin Hood tax. We forgot about that. It made the press when occupy movement started but we haven’t heard much about it since. No wonder. That’s about as popular as nationalizing the oil reserves. The greed wouldn’t allow it.

Although I think the Robin Hood tax is a good idea, I think the first thing we need to do is address the epidemic of bank fraud that is collapsing world economies. Speaking of which, we already heard the Greek financial crisis was the result of investment fraud. What was public money became private money then disappeared. Well, it turns out that Spain’s banking troubles are also the result of fraud. Imagine that.

We need to stop the fraud. Deregulation has opened the flood gates for criminals to steal from banks then demand tax bailouts. This is not only affecting our pensions and our standard of living, it is affecting our liberty.