New Podcasts about the Hells Angels and 911 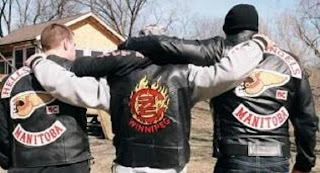 I finally finished my next two podcasts. One is about the Hells Angels and the Canadian Drug trade while the other is about 9/11 inconsistencies. I’m not trying to imply the Hells Angles were in any way responsible for 9/11. Those are two separate podcasts.

The Podcast about the Hells Angels and the Canadian Drug trade zeros in on Winnipeg and the recent family photo from Stony Mountain. That pictures shows the Hells Angels continued support for the Zig Zag crew’s drug trafficking.

The Podcast about 9/11 simply raises three points. The fact that the third tower collapsed into it’s own blueprint at freefall speed when no planes hit it. The fact that the Twin towers were half full of asbestos and the Port Authority were denied a permit to demolish them and had to pay for the manual removal of the asbestos. The fact that Operation Northwoods was real and was implemented in Europe as Operation Gladio. That’s it.