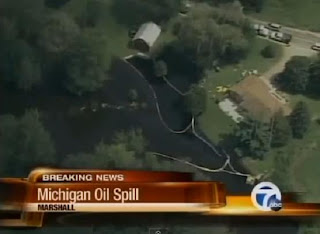 Everyone’s talking about a report on an Enbridge pipeline oil spill in Kalamazoo, Michigan. Tar Sands Oil Spill in Kalamazoo River in Michigan the Most Expensive Onshore Oil Spill in History. The spill was back in 2010 but the report was just released and hit the news. Opponents to the Northern Pipeline are using it as fuel to their campaign to oppose it. Even Christy Clark has expressed concerns about it.

I will come right out sand say I am not opposed to the Northern Pipeline. I am opposed to a reckless and irresponsible abandonment of safety precautions to protect the environment. One would think that as time progresses and we become more technologically advanced and one would hope more civilized so to speak, we would be having less detrimental impact on the environment we live in.

In reality, as time proceeds, the colossal scale of the devastation to the environment keeps growing and growing. The accidents keep getting bigger and bigger and keep doing more and more damage to the environment. It’s not even like spitting in the wind. It’s like pissing in your drinking water. It really isn’t very intelligent.

Somehow I got on an NDP e-mail list. I don’t normally read them because usually every e-mail from every political party asks for money. Yesterday I received an e-mail from the NDP claiming to be from Adrian Dix. It talked about the new report on the Michagan oil spill and raised some very valid concerns:

On Tuesday, the US Transportation Safety Board released a report on a 2010 oil spill from an Enbridge pipeline in Kalamazoo, Michigan. For 17 hours, bitumen from the Alberta oil sands poured from the pipe, spilling at least 3.2 million litres of oil with devastating impact.

I wanted to share what the Board's chair said today:

"On that July evening, at about 6 p.m. when many people in Marshall were sitting down to dinner, Enbridge's Line 6B ruptured and began spewing crude oil through a more than six-and-a-half-foot-long fracture.

"For more than 17 hours and over three shifts, the people controlling the pipeline did not respond to the alarms, pressure differentials or even follow one of their own safety procedures established following another catastrophic release in 1991 in Grand Rapids.

"The people of Marshall would finish their dinners, get ready for the week ahead and go to bed. As they slept, and even when they got up on Monday morning, instead of stopping the flow, Enbridge staff twice pumped more oil - about 81 percent of the total release - into the ruptured pipeline.

"It wasn't until late Monday morning - 17 hours and 19 minutes after the rupture - that a worker from a local gas utility found the spill and notified the Enbridge control center. Then, and only then, did the Enbridge staff begin their response and start closing remote valves upstream and downstream of the rupture.

"Learning about Enbridge's poor handling of the rupture, you can't help but think of the Keystone Kops." It's a damning indictment. And it highlights the enormous risks BC would take on if Enbridge is allowed to build the proposed pipeline here in BC and oil tankers are allowed on our north and central coasts.

It then links to a petition to stop the Northern Gateway pipeline. Personally, I am very concerned with the reckless abandonment of safety in the oil company’s pipelines. Personally, I don’t care if Adrian Dix is red, blue, green, pink or purple. He raises some valid points and expresses some valid concerns.

I do think an oil pipeline can be good for the economy but I don’t think it will be worth it, if we recklessly abandon safety measures to protect the environment. Clearly greed equates to irresponsibility. The huge oil spills in Alberta are concerning. We don’t want that in British Columbia.

The recent oil spills in Alberta, we are now hearing, were the result of rusty pipes that the company knowingly failed to perform scheduled maintenance on to save money. Herein lies the inherit problem: greed. Making money isn’t good enough we want to make more and more money at all costs.

The more I hear TV commercials for the Northern Pipeline the more angry I get. Stop spending money trying to brain wash me and start spending some money fixing the huge problems you have created and start spending some money on preventative maintenance. I’m still hearing Harper’s ridiculous attack adds on TV. The more I hear them the more I turn into Smeagol from the Lord of the Rings. Me HATES them. I hate them for the same reason I hated the HST commercials – because they were based on a lie.

Harper goes on and on about how Thomas Mulcair opposes trade agreements that will help the economy. That is such a lie it makes me want to scream every time they say it. TILMA is the prime example. Making it illegal for any level of government, federal, provincial or municipal, to create a law that would inhibit a corporation’s ability to make a profit. That is the devils deal.

Enbridge is based in Houston? Like that’s not suspicious. I don't support that. Isn’t there a Canadian company that can do the Canadian pipeline? How about we build an oil pipeline but we give the contract to someone else? Do you think if we gave the contract to Bridas, we would be invaded like Afghanistan was? I wonder…