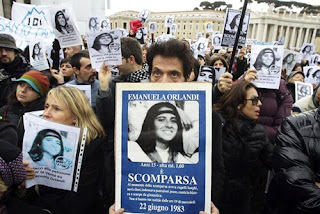 This is a cold case, in more ways than one, that has returned to the spotlight when a mobsters body was exhumed in Rome two months ago. In 1983, 15 year old Emanuela Orlandi was kidnapped after leaving her family's Vatican City apartment to go to a music lesson in Rome. Her father was a lay employee of the Holy See.

Enrico De Pedis a member of Rome's Magliana mob, was killed in 1990. His one-time girlfriend has reportedly told prosecutors that De Pedis kidnapped Orlandi, and an anonymous caller in 2005 told a call-in television show that the answer to Orlandi's disappearance lay in his tomb. Public protests erupted May 27 2012 and the body of De Pedis was exhumed. No word yet on any discoveries. I’m not a big fan of exhuming bodies. I don’t even like autopsies. I think the dead should be left to rest in peace. Yet there are many elements of this case that are worth examining.

In 2008, Italian news reports quoted De Pedis' ex-girlfriend as telling prosecutors that Orlandi had been kidnapped by the Magliana gang on the orders of Archbishop Paul Marcinkus, the late US prelate who had headed the Vatican bank and was linked to a huge Italian banking scandal in the 1980s. Marcinkus had always asserted his innocence in the scandal and the Vatican at the time of the allegation said the woman's claims had "extremely doubtful value".

First of all, we know that Paul Marcinkus was a bad man. He was in charge of the Vatican Bank when Pope John Paul I was murdered and when $1.2 billion were embezzled from Banco Ambrosiano through the Vatican Bank. There’s even talk about this case having something to do with the assassination attempt of Pope John Paul the Second.

Speculation has long swirled around the location of De Pedis' tomb, since it is buried in a prominent church alongside important Catholics - an unusual final resting place for a reputed local mobster.

One of the things I find strange is the tip that an answer to the girl’s disappearance will be found in De Pedis tomb. If a mobster ordered the murder of someone’s daughter, why on earth would they burry the girl's body in the same tomb? When the tomb was recently opened, investigators found some 200 containers with bones near De Pedis' tomb in the ossuary, and that they would be tested in the coming days and weeks. Still no word on what that was about. 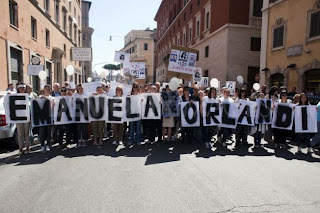