Was the Colorado shooting staged? 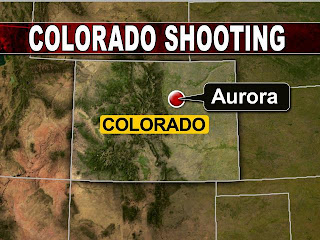 Whilst still reeling from the shocking shooting in a Colorado theatre, media outlets are starting to ask if assault rifles really should be available to the public. I wrestle with that myself. Here in Canada you can go down to your local sports store and buy an AR-15 or an M-15 assault riffle. It’s legal because it’s sold with a limited sized clip but there is nothing stopping anyone from buying a banana clip and switching clips after purchase.

One has to ask oneself should assault rifles really be available to the public. Yet there is another bizarre element that when thrown into the equation, makes you wonder. In the United States they have a constitutional right to bear arms. Jesse Ventura pointed out that right to bear arms was not to preserve a citizens right to hunt. It was intended to protect the nation from invasion, foreign or domestic. It is harder for a Fascist or a Communist dictatorship to invade and take over a nation where the civilians are well armed. Just like Scotland was back in the day when everyone would take their claymores with them everywhere they went, even to church.

I saw a recent link someone shared on facebook which implied the Colorado shooting may have been staged with the intent of eroding the constitutional right to bear arms. The article isn’t suggesting the murders were faked. The article is suggesting the crazed gunman might have had some evil influence or help from outside. As outrageous as that may sound, I think it is worth considering.

Michael Moore put out a very thought provoking movie about the Columbine massacre. One has to wonder what makes people go crazy and start shooting innocent civilians randomly. Yet the whole concern about black ops needs to be addressed. I’ve talked about 9/11 inconsistencies in one of the podcasts. Operation Northwoods was real and needs to be addressed. The ripple effect of those concerns affect Pearl Harbor, the USS Liberty and even the Oklahoma city bombing. It is a real concern.