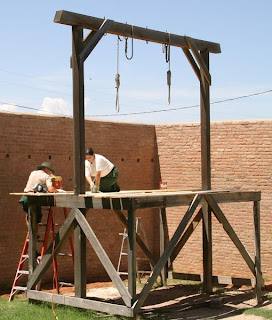 There’s been a lot of traffic on the post about the president of Bacchus in Saint John shooting someone outside their clubhouse. You could say it’s the story of the week. It even surpassed the Larry Amero sighting in Montreal. I take that back. Larry Amero's post just more than doubled the Bacchus shooting post. Ok trippled. Recently I did a podcast about the Big House Crew talking about the absurdity of the Free Deli and the Free Greg Domey campaigns.

Deli was a crack dealer who supported the Ontario Hells Angels murdering one of their own guys from LHS - Loyalty Honour Silence so the Ontario Hells Angels could take over the drug trade in northern Manitoba. Deli isn’t a political prisoner. He’s a crack dealer who supported the betrayal and murder of one of his own guys. Likewise Greg Domey was a crystal meth dealer in Massachusetts. Nothing noble there to campaign for.

Now we officially enter the Twilight Zone as brain dead zombies create a Free Matt Foley page. This is the president of Bacchus that shot the guy dead outside their clubhouse and recklessly endangered everyone in the neighborhood because he was a lousy shot and shot up the whole neighborhood. A campaign to free that guy is stupid and evil.

What’s even more shameful and absurd is Matt Folley the fuck up posing with a baby in a picture on the site. He’s trying to gain sympathy. He just murdered someone’s baby. That is totally offensive. They have brain dead idiots posting offensive comments like you’re in our prayers. We’re praying for you to come home soon. Yeah, praying to who? Because murder is not of God.

I’m sure the victims family are praying their loved one wasn’t murdered. To ask God to bring a murderer home without justice is to mock God justice. We all know that Bacchus are a puppet club for the Hells angels who say support your local 666. These people are insane and offensive.

Instead we need to launch a campaign to have him hanged. I’ve never been a fan of the death penalty but when I see such an outrageous mockery of justice I’m convinced that it’s time to bring it back. Clearly these people have no conscience and the consequence of the law is the only thing that will restrain their murderous hearts.