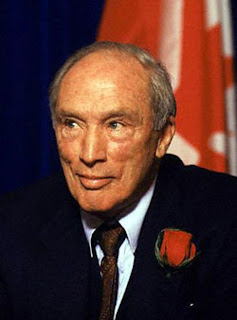 Very interesting editorial in today’s Vancouver Province entitled “Harper's abuses of democracy threaten liberty.” Michael Den Tandt gives an interesting analogy and comes up with a valid and stirring conclusion. Growing up Conservative, I was always told it wasn’t the government’s job to find jobs for people. I was told it was the government’s job to protect liberty and let a free market create jobs for people.

Interestingly enough, Michael Den Tandt talks about Trudeau’s long reign as Prime minister of Canada and points out that Trudeau was less concerned with the economy and more concerned with protecting liberty. Somewhat ironic when Harper’s Mulroneyism claims the exact opposite. They hate Trudeau. They say he was a Commie that put us in debt and destroyed our country.

Somewhat ironic when they are digging an obscene debt deeper than Trudeau ever imagined with their bank bail out and insider trading jets. Somewhat ironic when Harpers Neo Cons claim to fight for democracy and liberty when their actions are the exact opposite.

Although my family never voted Liberal, Trudeau was always a respected leader. He was a political leader as opposed to a dirty politician like Harper and his slimy band of evil doers. We were told that Trudeau’s tradition of French Common law where the government created jobs for the public was bad and wrong. Yet in retrospect I think finding jobs for the public was a lot better than robbing taxpayers by giving their taxes to pay for bank fraud.

During the Occupy movement I remember a sign that said “We have privatized gains and socialized losses. That is not Capitalism.” Harpers obsession with big corporations creating monopolies is not a free marker either. A free market means small business has just as much a chance as the next guy to create a company and profit from an idea.

Trudeau gave us the Charter of Rights. Harper is eroding it. Robocalls, warrantless surveillance. Trade agreements that give up democratic sovereignty. Over burdening our prisons and judicial system with nonviolent crime preventing us from dealing with violent crime. Cutting our military and coast guard to pay for insider trading. It’s all one big nightmare really. Is there hope in Trudeau Jr? I don’t know but I do know there is no hope in Harper’s nightmare.

Michael Den Tandt quotes Trudeau Sr. when he was a cutting journalist and said: "It is a serious matter when the government attacks our inalienable rights, whether by laws or by executive action," he wrote. "it is still more serious when citizens, through cowardice or stupidity, relinquish their rights even when not required by law to do so."