Christy Clark implicated in BC Rail on wire tap 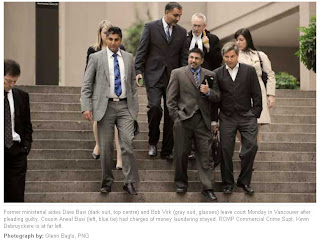 The plot thickens. We had heard Christy Clark was implicated in the BC Rail scandal along with her brother last November. Now John van Dongen’s court challenge has produced wire tap evidence confirming it.

There are two issues on the table. First is the corrupt way a public company was sold out to political insiders in exchange for political contributions. The other is Bassi / Virk’s connection to their cousin’s cocaine trafficking ring and money laundering charges.

Before we get into that, let’s examine something Alex G. Tsakumis reported last November. Kelly Reichert, the former BC Liberal Party Executive Director was and is the brother-in-law of the RCMP investigation team’s Captain, then Sgt. Kevin DeBruykere - now a senior Inspector. It was he who led ‘Operation Everywhichway’.

A ‘Do Not Disclose’ document surfaced which was authored by an investigator who was present when former BC Liberal Party Executive Director Kelly Reichert was being interviewed by the RCMP.

In the document, it was noted that, at one point, Mr. Reichert’s interview with the RCMP was interrupted (and recording stopped), while he revealed that it was indeed, Mr. Reichert himself that told then premier Gordon Campbell of the ongoing investigation and the details about Erik Bornmann’s confessions, including those related to Pilothouse Public Affairs and the operation that led to the charges against Dave Basi and Bob Virk.

Immediately Special Prosecutor Bill Berardino jumped up to object to Bolton’s questioning. The jury was excused and the longest legal wrangling delay in the trial began. With the jury excused the wrangling was under publication ban. What happened that last week of June in Courtroom 54 has never been reported.

That meant the defence couldn’t make a point of the close familial relationship between deBruyckere and Reichart. They couldn’t argue that the relationship was a conflict of interest that skewed the investigation. Couldn’t enter supporting evidence such as wiretaps or evidence of deBruyckere meeting Reichart and Reichart subsequently meeting with Premier Campbell to debrief him on the state of the investigation.

Holy conflict of interest. The lead investigator from the RCMP was the brother in law of the BC Liberal Party Executive Director. The BC Liberal Party, who were under police investigation for fraud, were the ones who negotiated and signed a renewal of the RCMP’s contract amid scathing reports and calls for a Regional police force. That is nothing but a conflict of interest.